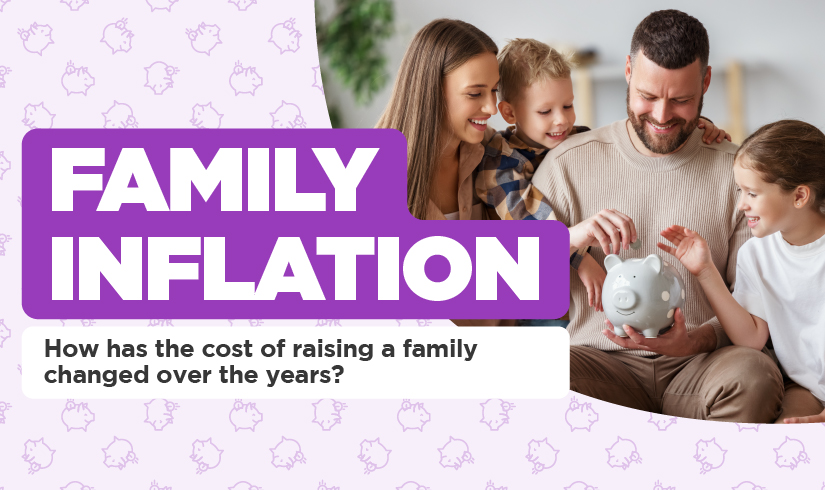 Raising a family has always been a fun yet daunting proposition, as raising a child takes a great deal of time, effort, and money. However, for many the reward of the joy of building a family, and helping ensure the continuation of the human race is well worth the cost. Unfortunately, the cost of raising a family (just like most things) has risen dramatically over recent years, so some people can no longer afford to adequately raise a family.

A number of factors, and how these differ from year to year, have been analysed to see how they have changed over recent years. Just on these few factors, people are paying an average of 37% more than ten years ago, and 21% more than four years ago. One thing children love is their toys, whether they be playing with toy cars, walking their doll around in a dolls pram, or playing on a games console. Consequently, the change in the price of certain toys over the years shows how it has become more expensive to provide entertainment for a growing family.

Aspects with the biggest ten-year increase

The cost of the internet has had the biggest increase in average prices over the past decade, as they have risen by just over two thirds. Previously it cost an average of £18.03 a month, whereas it is now over £30, which constitutes a £12.02 increase. This is compounded by the fact that we are ever more reliant on the internet, and raising a family will create even more usage as streaming films and tv can be a great way to keep a child entertained.

To transport a growing family around, owning a car can be very useful, especially in areas without amazing public transport links. Unfortunately, in the last ten years, the price of a brand new VW Golf (one of the best selling cars in Europe) has increased by 52.8%. On top of this, fuel prices are skyrocketing at the moment which compounds the price increase.

3: Monthly rent for a three-bedroom house

Housing prices have increased rapidly over the last generation or so, and in line with this rental prices have also jumped up. Since 2011, the average monthly cost of renting a family-sized house or apartment has increased by £414, or 47.4%.

For those who cannot or do not want to drive, public transport is the option most often chosen for transportation. Although costs of monthly passes have not increased as much as car ownership, they have still risen by 43.6% in a decade.

5: Cost of a cinema ticket

Films are often a great source of entertainment for children and a good way to keep them occupied for 90 minutes or so. Moreover, some films designed for children can be enjoyed by all the family, with animation studios such as Pixar often making their stories as riveting for adults as their children. The price of a cinema ticket has risen by 25.2% to an average of £10, however, it has not increased for four years.

Films, limited series, and box set classics. Netflix is home to them all, and is one of the best known stream platform right now. Despite the increase in competition for such streaming sites, such as Disney+, NowTV, and Hulu, Netflix has consistently increased it’s prices for both it’s standard and premium plans over the last 5 years. The basic plan has seen an increase of £3 from 2017 to 2022, a 37.55% increase, while Netflix’s premium plan has seen a whopping 60.06% increase, going from £9.99 in 2017 to £15.99 in 2022.

In the 21st-century computer games have become increasingly popular and widespread, and games consoles can be a fun source of entertainment for a growing family. However, the cost of a brand new PlayStation is extreme, at just under £450 for the current fifth-generation system. Back at the turn of the millennium, a first-generation PlayStation would have cost under £100, constituting a 350.0% price increase.

Another toy that has seen a vast price increase, is the electric train set. More specifically, the Hornby Eurostar train set, which has jumped from £72 up to £206, an increase of just over 186% in price.

The toy with the third-highest increase is on the market at a much lower price point. The children’s game Connect Four will currently cost £14. However, in the year 2000 it would only set you back around £6. Despite the game staying the same it has more than doubled in price.

Inspired By Disney: Baby Names
36 Things Every Mum Has Done In The First 3 Years Of Motherhood
5 Great Ways To Celebrate The Birth Of A New Baby