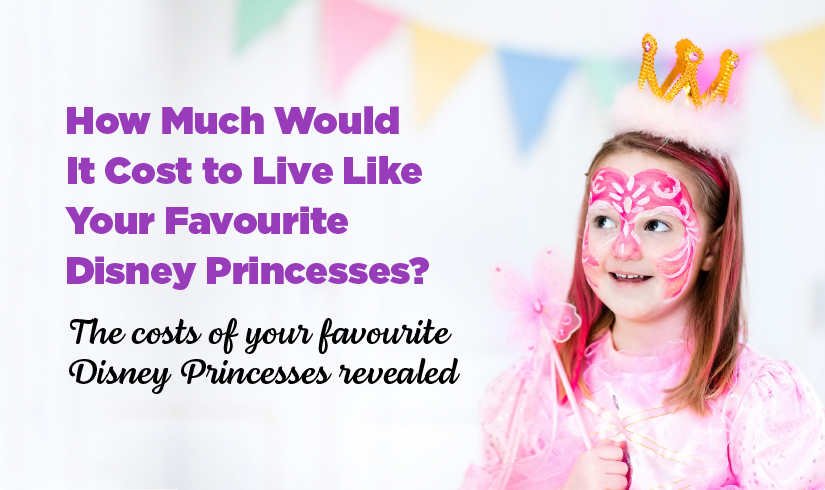 If you’ve ever watched a Disney Princess movie growing up, you’ve likely thought “wow, I wish I was exactly like that Disney Princess”. After all, a lot of kids spend their childhood dressing up as princesses letting their imaginations run wild.

You might even think, once you’re older, what would it cost to live in a palace like a Disney Princess? It’s not very often you see these animated characters worried about castle mortgage payments, maintenance costs and such–the sole exception that springs to mind is Tiana.

We’ve used property price data and the price evaluations of the real-life inspirations for these Disney Princess castles to bring you the cost of being a Disney Princess.

And also, be sure to check out our vast range of exclusive Daisy Chain dolls prams and pushchairs.

Despite being based on a Danish fairytale of the same name by Hans Christian Andersen, Prince Eric’s Disney castle is based on the Château de Chillon, which is located in Switzerland.

Unfortunately, it proved too difficult to track down the estimated price of the property or the price to build it, so we had to resort to alternatives. Looking at the average price of castles in Switzerland–of which there aren’t many–we got the average price of nearly £11.69 million for a Swiss castle. Though, admittedly, getting one by a lake might be a challenge.

Beast’s Castle – Beauty and the Beast

This is one of the coolest Disney castles – talking clocks, teapots and other household items and that library are astonishing. Beast and Belle’s castle is based on the Cháteau de Chambord, a vast castle in France’s Loire Valley, which was originally built as a hunting lodge for King Francis I.

The second most expensive castle to feature here, for all you Princess Jasmine fans, is the Sultan’s Palace. The design is rather obviously taking inspiration from the Taj Mahal, the similarities are there.

It just so happens, that there is an estimated value for the Taj Mahal – ₹70 billion as of 2020, which works out at £741.8 million, with inflation that rises to £723 million as of 2021. With that estimate, it makes it one of the most valuable buildings on the planet. Perhaps it’d be easier to acquire a genie to wish such a castle into your possession.

Though she is typically found living up in a tower, her actual home is indeed Corona Castle, in the kingdom of Corona. Now, this castle is based on the real-life Mont Saint Michel, in Normandy, France and the price for this castle was indeed formidable to acquire.

However, the Smithsonian reported that in 2005, the Normandy local government spent $300 million to restore the castle–which in 2021, with inflation accounted for is £240.6 million. It seems like you get what you pay for and this is truly a breathtaking castle.

Like Rapunzel, Aurora doesn’t spend a lot of time living in her castle, in fact, she lives in the woods for sixteen years, due to the curse inflicted upon her. The castle that Aurora was deprived of living in, was inspired by the real-life Neuschwanstein Castle, a 19th-century palace in Germany constructed under the order of King Ludwig II of Bavaria. Interestingly, Ludwig chose to pay for the castle’s construction himself and by borrowing money, instead of using public funds.

The costs, during the king’s time, amounted to an estimated 6.2 million marks, which was equivalent to €43 million in 2017. We calculated, with inflation, that would come to around £36 million today.

The magical palace was created by Elsa so that she could go ahead and not “let them in”. Pricing a castle that was made by a princess with magical powers was pretty tough, but it turns out that this castle also had a real-life inspiration.

The Hôtel de Glace, in Quebec, Canada is a hotel built out of ice and snow and served as the inspiration for Elsa’s much more elegant take on the idea. Every year, the hotel needs to be rebuilt and the Quebec local government set aside $1 million in funding every year to do so. That comes to £802,280, making it the cheapest castle of them all.

However, Elsa’s is probably much larger and is, well, made from ice magic.

This may not be Mulan’s castle, however, it is the place where she saved all of China, a feat that secured her place among the Disney Princesses. The palace in Mulan was based on The Forbidden City in China and it is the most valuable piece of real estate in the world, as of 2018.

Back in 2018, it was valued at around $70 billion, which is an almost incomprehensible sum of money. Taking inflation into account, that is equivalent to £73.8 billion as of 2022.

Tiana’s Palace – Princess and the Frog

While this one isn’t strictly a palace in the conventional sense, Tiana’s restaurant does have the word “palace” in its name and she is a Disney princess. Before it became Tiana’s Palace, it was an old rundown sugar mill and the film is based in New Orleans.

Based up in the wildlands of Scotland, filled with sprites and humongous bears is Castle DunBroch, home of Merida and her family. This particular castle was based on a few Scottish real-life castles: namely, Dunnottar Castle and Eilean Donan Castle.

At current, prices for those specific castles were unavailable, however, there are a lot of listings in Scotland for castles – taking nine of those prices, we got an average price of £3.1 million.

Throughout Snow White’s tale, this castle changes hands a lot, it was the King’s castle, then the Evil Queen’s and then Snow White’s, finally. It has been through a lot.

It was inspired by the real-life Spanish fortress and castle of Alcázar de Segovia, which we were unable to get a price for. Alcázar de Segovia was the palace from which 22 Spanish kings ruled and is now a historical museum. Since no price was available, we looked at castle listings and got an average price of just over £3 million.

Alternatively, you can always try to board with some dwarves for free.

We started by taking the palaces from each of the Disney Princess films/worlds and then using Geek Trippers we found the real-life castles that they were based on. We used this as a starting point to get estimated costs for these fictional castles.

However, where the real-life counterparts’ prices were unavailable, we simply looked at price listings on sites such as Castleist to get an average price for the region in which the real-life castles were.
Where prices were dated, we used a US and UK inflation calculator to get a more accurate and up to date estimation of the price values. Where prices were converted to GBP, EUR and USD, conversions were done on 17/05/2022, at 09:41 am, 09:35 am and 09:34 am respectively.

Every Country’s Favourite Disney Princess
England’s Most Family-Friendly Towns & Cities
How Long Did It Take To Write Your Favourite Children’s Books?