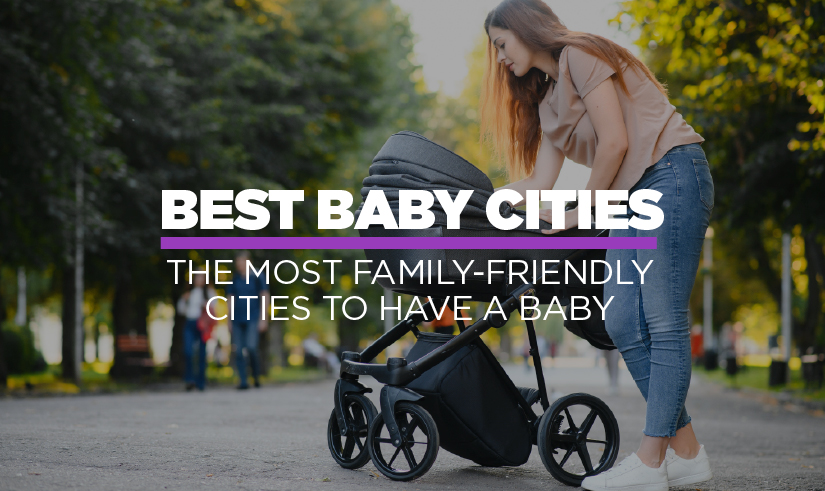 The most family-friendly cities to have a baby

There’s so much to think about when you’re expecting a baby – from buying the cot, nappies, pram, and maybe even a doll’s pram for your child to play with.

However, there’s more to consider than just toys and baby clothes, what about the city you live in? It’s no secret that some areas are more family-friendly than others, but how do you choose between them and select the best place for you and your kids to live?

We took the guesswork out of it, by comparing the cost of childcare, safety, number of child-friendly attractions and restaurants and the number of children in the area, to reveal the UK’s top baby-raising cities.

Bath secured the top spot on our list as the most baby-friendly city – let’s take a look why.

The average cost of childcare per month in Bath is £850, which is much lower than the £936 national average. For working parents, that monthly saving can make a huge difference, and give you that all-important budget for fun days out. And there’s no shortage of things to do in Bath – with the most child-friendly attractions per 10,000 people in the UK, you can be sure that the kids are always entertained! From the annual Children’s Literature Festival to role-playing events in museums hosted over the Summer holidays, there’s an abundance of activities for the family to enjoy.

That’s not all that makes Bath the UK’s best baby city – it placed in the top ten of most of our categories! It’s the ideal place to be for those worried about crime, as the 3rd safest city in the UK, and came in 4th place for the most child-friendly restaurants.

The safest city to raise a child

If safety is your main concern, you might consider moving to Chelmsford or St Albans. At the top of this category, these cities are the nation’s most risk-free with safety ratings 79 and 73.

But how do they compare across the board? Chelmsford sits at 19th on our overall list, followed by St Albans in 8th. And it’s easy to see why – childcare would set you back £1,200 a month in Chelmsford and £1,403 in St Albans, which is more than £400 over the national average!

Although more expensive for childcare, St Albans ranks higher for the number of attractions and restaurants that cater to kids which could make it the better option for new parents looking for exciting things to do.

The city with the cheapest childcare

For those worried about the pennies adding up, the price of childcare per month may be the all-deciding factor on where you choose to raise a family. If you asked most people how much they pay for daycare you’d likely get the same answer… too much. More and more parents are being forced to become stay at home mothers and fathers because childcare is just too expensive. However, if you choose the right city, it doesn’t have to be.

The cheapest city for childcare in the UK is Leicester, where it will cost you just £470 a month, that’s almost half the UK average! Although it places 26th in our overall ranking, with only 350 households with children and eight child-friendly attractions per 10,000 people.

Following closely behind with the second most affordable UK childcare is Plymouth, where it will cost £500 a month on average. It takes the 18th spot on our list, thanks to its high safety rating and number of child-friendly attractions by population. And with over 560 households with children per 10,000 people, Plymouth has a large community of families for new parents looking to socialise.

The city with the most child-friendly restaurants

Between working, cleaning and laundry, the last thing you want to worry about is making home-cooked meals every night. After a busy working week, all you likely want is for someone else to do the cooking, which is why having local food options for you and the kids is essential.

Brighton is the clear winner in this category, with over 37 child-friendly restaurants per 10,000 people you can be sure there’s always something new to try! This UK holiday destination has no shortage of activities to keep the family entertained, including upcoming festive events like the Halloween Spooktacular and Santa’s Breakfast.

As one of our top scorers across the board and 4th on our list, the seaside resort is one of the best places in the UK for a family to settle down.

To discover the most pram-friendly city in the UK, we created an index to rank each city by the number of pram-accessible parks, shops, toilets with baby-changing facilities and children’s play areas per 10,000 residents. With the highest number of accessible shops and parks by population, Westminster tops this category, so you can be sure that you and your kids can easily get around.

However, there’s more to consider than trips out – The average monthly cost of childcare in Westminster is an astounding £2,133, which is by far the highest across the nation! That expense alone rules this borough out for many families when choosing where to live.

Although just around the corner from the heaps of restaurants and family households in London, Westminster ranked low for child-friendly eateries and households with children by population. Meaning those in search of variety and support might prefer to live in London, yet for parents worried about safety Westminster comes out on top.

The worst city to raise a baby UK

It’s probably no surprise that the UK has plenty of family-friendly cities, which could leave you spoiled for choice, but it’s just as important to know which areas you might want to avoid.

The city named as the worst in the UK to start a family is Coventry – and when you look at the figures it’s easy to understand why. The West Midlands city has one of the lowest safety ratings across the country at just 39! With few family attractions to visit and a limited choice for dining out, new parents might choose to stay away.

We researched the cost of childcare and safety rating of 42 UK cities using Numbeo.

From Tripadvisor, we collated the number of ‘child-friendly’ restaurants and attractions listed as ‘good for children’ in each city, and divided this per 10,000 residents.

We then used the Office of National Statistics Table 420 of Household projections for England to determine the number of households in each city with children per 10,000 people.

From the site AccessAble we found the number of ramp-accessible parks, shops and children’s play areas in each city. We also searched the number of public toilets with baby-changing facilities and divided these figures per 10,000 of the population and totalled them to give an ‘accessibility score’ to each city.

We used these figures to form our final ranking of the best city in the UK to raise a baby.