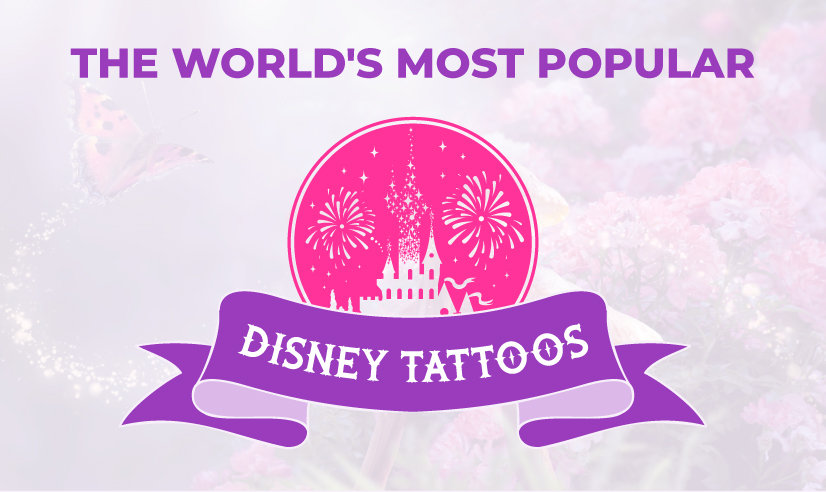 Every child spends their childhood differently, whether it’s playing with dolls prams, or spending time at parks or playgrounds. But, the one thing that many children experience is the magical world of Disney. This love that you develop as a child can stay with you forever, and for some, a tattoo can be a great way of immortalising this.

If you are one of those die-hard Disney fans, getting a Disney-related tattoo is a no-brainer, but with so many fantastic Disney movies out there, the choice can sometimes be overwhelming.

So which Disney tattoos are most people opting for? We turned to Instagram to discover which are the most popular!

Top 10 Most Popular Disney Tattoos of All Time

We’ve looked at both Disney films and characters and combined them into one big list, to find out which Disney-themed tattoo was the most popular.

Alice in Wonderland is the most popular Disney inspired tattoo with 76,000 Instagram hashtags. The 1865 novel by Lewis Carroll was transformed into a Disney animation in 1951 before Tim Burton put his spin on the story in his 2010 film starring Johnny Depp and Anne Hathaway. The colourful and mystical characters such as the Cheshire Cat and the White Rabbit have inspired masses of fans in the tattoo parlour.

The cute blue genetic experiment, Stitch, takes second place with 49,100 Instagram hashtags. Lilo turned Stitch from a destructive creature to one that was capable of caring for someone else, and this transition has won over the hearts of many fans. His big ears and small koala-like frame are so adorable that Stitch has inspired almost 50,000 tattoos.

The Lion King completes our top three with 36,400 tattoo-related Instagram hashtags. The timeless Disney classic is the third most popular Disney-inspired tattoo on our list, with over 10,000 more inked-up Instagram posts than Mickey Mouse in 4th place. The emotional story of Simba, who reclaims his throne after Scar, his uncle, murdered his father, tugged on the heartstrings of every Disney fan.

The characters can make or break a film, and with Disney, we just seem to fall in love with the characters over and over again. We’ve looked at the long list of Disney characters to find out which characters have inspired the most tattoos.

After taking second place in our overall list, Stitch takes the number one spot for Disney characters with 49,100 Instagram hashtags. Those big eyes and floppy ears make for an adorable tattoo, and his blue fur gives you the opportunity to add a nice pop of colour.

Mickey Mouse takes second place with 26,000 Instagram hashtags. Mickey Mouse was one of the earliest Disney characters created, dating almost 100 years back to 1928. He has since become a mascot for the Disney franchise, with his big round ears becoming recognisable all over the world. His contagious smile and huge yellow shoes complete the character that has inspired the second highest number of tattoos out of all the Disney characters.

The protagonist of the Lion King completes our top three, with Simba receiving 21,900 tattoo-related hashtags. Watching Simba grow up into a strong and powerful lion was an iconic part of the film, however, it’s Simba as a cub that has inspired the most tattoos. His relationship with Nala has also inspired many tattoos.

Disney films have become a huge part of people’s childhoods, and watching them can be a great way of making memories with your family. That’s why we’ve looked at which films have inspired the most tattoos.

It’s no surprise that after taking the top spot in our overall list, Alice in Wonderland takes the top spot again. The story of Alice falling down a rabbit hole and entering a fantasy world is not just exciting, it’s also inspirational, encouraging the idea of standing up for yourself.

The Lion King enters the top three for the third and final time with 36,400 Instagram hashtags. As well as Simba and Nala tattoos, there are also a few Scar tattoos on Instagram with people taking a liking to the villain of the movie.

Completing our top three is the magical story of Beauty and the Beast, which has received 18,300 Instagram hashtags. As well as the main characters, Belle (the beauty) and Adam (the beast), one popular tattoo from fans was the enchanted rose. The loveable furniture, such as Mrs Potts and Chip, Lumiere and Cogsworth were also tattoo inspirations for some.

Only animated films were included, and characters that exist outside of the Disney universe were excluded (such as Zeus who is part of wider mythology) in order to avoid the results being skewed by non-Disney-related tattoos.

We also excluded a number of more minor characters from our original source list, as well as character names that are not immediately recognisable with the Disney character and any hashtags with fewer than 50 results.

The data is accurate from September 19th.