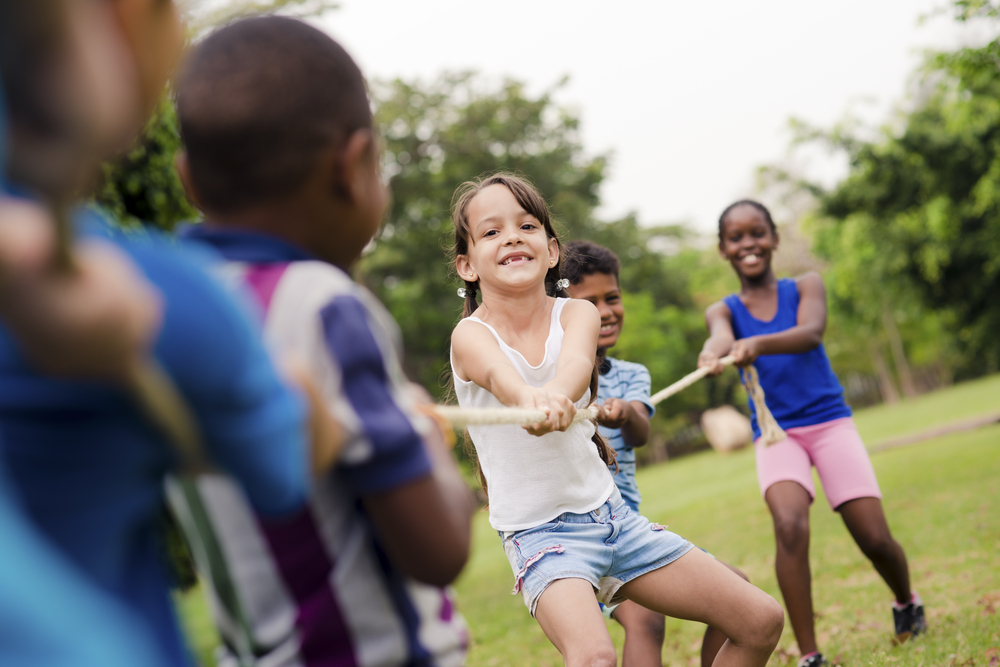 Ah, summer! The perfect excuse to get the kids outside and enjoying the sunshine while it lasts! Whether you’ve got a kids birthday party coming up or want to get involved with some fun outdoor games yourself, it can be difficult to know what games to play or, more importantly, what ‘kids nowadays’ will enjoy.

Luckily for you, we’ve got a pretty good idea of what might tempt your little ones out into the garden. They’re tried and tested games, and we guarantee there will be some on this list that you recognise yourself from your childhood

Are you ready to get your game on? Let’s begin!

With the weather turning warmer, there’s no better time to pull out the water games! A firm favourite with kids and adults alike, dodgeball can be adapted with water balloons to create the perfect summer outdoor fun.

For this, you’ll need some water balloons, ideally in two different colours to differentiate the two teams. These will need to be filled and placed in a bucket in the centre of the garden area, and using a rope or a hula hoop, create a ‘no fire zone’ around the bucket to stop the teams from trying to hit each other with the balloons as soon as they get them.

Set out areas for each team to stay in facing each other. These will act as boundaries from each team, and each player will need to remain within their team boundary to make the game fair.

Once the game starts, the players run to the bucket and grab as many balloons as they can hold and run back to their team’s space. The aim of the game is to throw the balloons at the opposing team and hot them. If a player is hit, they are out until a winning team or team member is left standing

Blanket run is a fun game to play with a few or even many children. Using a blanket as a sort of sledge, one child sits on the blanket and holds on, while the other child holds the end of the blanket and pulls them along in a race-style game.

You’ll need to find some old blankets that you don’t mind getting messed up and a rope to use as a finishing line…and that’s it for the equipment! Quick and easy to set up and pack away!

Split the children into two teams and start off with one child on the blanket, holding on and the other holding the end. When the game begins, the aim is for the teams to get to the finish line, swap places and head back to the starting line with the roles reversed – the puller will now be sat on the blanket and the sitter will be puller.

An old playground favourite that we’re sure pretty much every one of you has played at some point in your life, tag is a great way to get the kids burning off some energy as well as having fun. There are also various different ways of playing to keep things fun and interesting!

The base game of tag is really simple. You’ll need to choose one person to be ‘it’ and it is their job to run around after the others trying to tap them and eliminate them from the game. This is a great, fast little game, but there are ways to prolong it to keep the kids entertained for longer:

Using the base premise of tag, still choose one person to be ‘it’ but change the rules slightly so that if a player gets tagged by ‘it’, they have to stand completely still. They can be unfrozen by other players who are running around, but the end of the game will be determined when everyone is frozen

A slightly harder version of freeze tag where when ‘it’ tags one of the players, they become a ‘hot dog’ and must lay on the floor with their arms by their side. They can only be freed from being a hot dog if two other free players lay on either side to make a ‘bun’. This can be tricky, especially nearer the end of the game as it means other people taking a risk for their friends.

Another fun game that many parents will probably remember from their childhood is tug of war. This game needs supervision to ensure that no one gets hurt or falls over as it’s a real test of strength

As the adult, it is probably best for you to split the children into two teams. Try and make them equally balanced in terms of the size and number of children to make it as fair as possible.

You will need a long length of rope with a marker to show the middle point, a marker placed on the ground to show where the middle is, and two more markers either side that the tuggers will have to aim to get the rope’s marker over to win. These two ground marker should be about two strides from the middle ground marker

When the game commences, each team is required to pull on the rope and try and pull the other team towards them and pull the rope marker over their line. This should hopefully reduce the chances of kids falling over.

If you want to add a little difficulty to your games, you could set up a mini obstacle course. Using various different items, create a course which tests the skills of the kids and see them have some fun at the same time!

You don’t have to go overboard when it comes to creating an obstacle course. There are plenty of low preparation obstacle course ideas which are easy to set up with very little thought

Using items such as ropes, hula hoops, planters, ball pits, and even items you already have in your gardens like slides and swings, you can create fun, exciting courses that suit a wide range of age ranges and abilities.

This game has a variety of names, but all follow the same principle – you’ve got to get to the wall without being seen moving!

Choose one person to play as ‘it’ who stands facing the wall and who acts as the traffic light. The rest of the players should stand a good five meters behind them, all facing the wall, too.

The player who is ‘it’ will then shout green light, and the other players must begin to move towards them until ‘it’ says red light and spins round to face the players. At this point, the players must freeze on the spot where they are, and any player seen moving will be sent right back to the starting line. All players must remain frozen until a green light command is given again.

The winner of the game is the one who can successfully reach ‘it’ and tag them.

All you need for this game is a supply of empty drinks cans and an open space. It’s a mixture of hide and seek, capture the flag and tag all in one, making it a great, high-energy game!

One player is designated as ‘it’ and places the can in the middle of the playing space. They are then required to close their eyes and count to 60 to give the rest of the players time to go and find a hiding place.

Once they reach 60, ‘it’ is required to seek out and tag players, all the while keeping a close eye on the can, which the other players will be aiming to get to without being seen. If they reach the can, they will need to kick it in order for the game to end.

Keeping kids excited and entertained while enjoying the outdoors is important, especially as we’re a society who are known to be glued to our devices. Help your kids enjoy the good weather while it’s around – you’ll regret it on those rainy days!