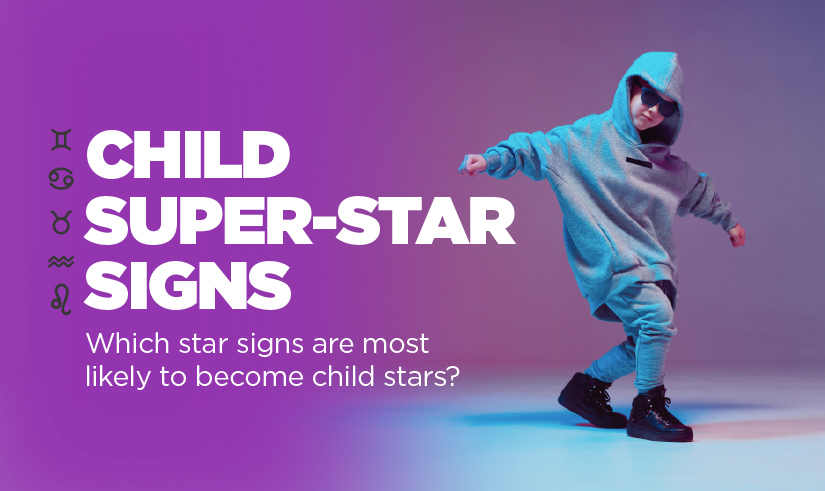 Which star signs are most likely to become child stars?

In total we recorded data for over 6,000 child stars, ranging from dancers and stage actors to reality stars and Tiktok celebrities. This data consists of all recognised child stars between the ages of 1 and 18 as of February 8th, 2022. We took the top 12 professions to see what star signs these professions were most likely to be.

Here at Play Like Mum, the experts in dolls prams and children’s play, we’re always interested in the childhood experiences that shape us, but we wanted to know if something as simple as a child’s date of birth could destine them for greatness!

The star signs most likely to be child stars

The most common superstar across all star signs was Youtube star, with 1,608 of our 6,049 child stars coming from Youtube. Youtube stars were followed by TikTok Stars with 1,133 child superstars on this social platform.

Gemini is the most likely star sign to reach childhood stardom with 543 child superstars currently recognised on famousbirthdays.com. This is 2.5% greater than the runner-up, Cancer, and 19.1% greater than the star sign with the least number of child superstars, Capricorn. It seems Geminis, born between May and June, thrive on social and creative media platforms as both Youtube stars and TikTok stars were most likely to be Gemini’s.

Born in the summer months of June and July, Cancer is our second most common star sign of all child stars with 529 recognised stars. This is 2.1% greater than the next star sign on this list. Cancers are more likely to find fame in promotional professions, with both models and Instagram stars most likely to be Cancers.

Taurus completes our top three with 518 child stars, 20 of which are accomplished dancers. Dancers are most likely to be Taurus than any other star sign and twice as likely to be Taurus’ than they are Leos. Taurus’ are born between April and May.

Aquarius just miss a position in our top three with only three fewer child stars than Taurus. Born in January and February, Aquarius’ are more likely to claim the fame of their family members. Child stars who are famous because they are related to someone famous account for 893 stars in our sample, and 80 of those are Aquarius.

Leos fill the fifth spot on this list with 514 child stars, just one less than Aquarius. Movie actors and actresses are most likely to be born around July and August and be Leos, followed closely by Virgos.

Virgos, born around August and September time, do not make up the biggest number of stars in any of our top professions and come in sixth place in our list of most likely to be child stars with 509 total child stars.

With 507 total child stars, Scorpios fill the seventh spot on this list with just two fewer than Virgo. It seems that Scorpios excel in the music industry, where rappers are most likely to be Scorpios, born between October to November.

Number eight on our list is Pisces, born between February and March. Pisces are also most likely to be Instagram stars along with Cancers, with each star sign making up 65 Instagram stars out of the 672 in our sample.

Aries, born in March and April, make up the highest number of pop singers in our sample. Out of the 492 Aries child stars, 17 are pop singers.

With 481 child stars, Sagittarius comes in at number 10 on our list. Born at the end of the year between November and December, Sagittarius’ make up the most reality stars in our data with 14 out of 110 reality stars being born as Sagittarius.

Libras, born between September and October, are another star sign that does not make up the highest number of any top profession for childhood stars, and come in second-to-last on our list of most likely to become child stars.

Unfortunately for Capricorns they have the lowest number of child stars and don’t have the highest number of stars in any of the top professions either (we’re sure this isn’t just because they are born as the year finishes in December and January).

We explored data from famousbirthday.com for all child stars (famous people aged 1-18) and recorded their star sign and profession to calculate the totals for each star sign and each profession.