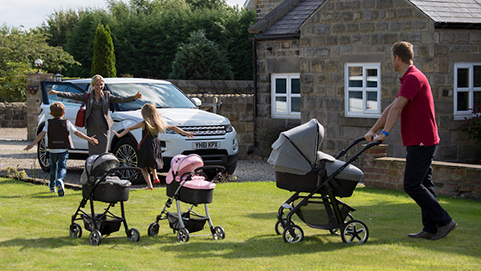 Christmas is just around the corner, so it’s the perfect time to treat the little person in your life to one of our brand new doll’s prams.

But once you’ve decided which pram you want, the actual giving of the gift is half of the fun, so how are you going to do it? Here are some ideas to get you thinking.

Because what use is a doll’s pram if you haven’t got any dolls to look after? We’re sure your little ones probably already have their fair share of dolls that they love to play with, but why not treat them to a new one for Christmas?

Alternatively, hide away your doll’s pram and just give them their new doll to start with.

Hopefully, they’ll be grateful for their new friend, but you can try gently teasing them by saying things like“Isn’t it a shame she hasn’t got a nice pushchair we can take her out in?”.

Then, of course, just as they’re starting to wish they had their own pram, it’s time for the big reveal!

This is a really fun way to build anticipation as well as giving the kids something to keep them occupied throughout Christmas morning.

It can be as simple or as elaborate as you want, but the idea is to leave a trail of presents and/or clues around the house for the children to follow, all leading up the main event; their brand new doll’s pram!

You can find all kinds of riddles and clues on the web to use, or make your own up. The key is to make them challenging enough to get them thinking, but not so tough that nobody gets any presents!

Gradually make the presents bigger and better, perhaps throwing in some clues as to what the final prize is going to be, such as some accessories for the interactive doll.

Check out this wikiHow article for a more detailed guide on how to throw your own Christmas scavenger hunt.

Holding back one ‘surprise’ present is one of the oldest tricks in the book, but that’s because it works!

Let the kids open up all the rest of their presents, but while they’re busy doing so, send Mum or Dad upstairs to sneak their new doll’s pram into their bedroom, waiting for them when they come back upstairs. The surprise on their faces will be totally worth it!

Another sneaky method is to swap out the packaging to misdirect the kids into thinking they’re getting something way less impressive.

Take the pram out of its packaging and disguise it in a big plain cardboard box, or maybe be really cruel and put it in the box of something boring like a hoover!

The kids probably won’t thank you at first, but once they rip it open and realise it’s a brand new pram just like mummy and daddy’s, they’ll quickly forgive you!

Make sure that you don’t go too far with this though, it’s obviously meant to be a bit of fun and the last thing that we want is upset children on Christmas morning!

However you decide to present your new doll’s pram, we’re sure your little ones will adore it. However, coming up with a creative way to give it to them on the special day makes it all the more memorable and it’s also a bit of fun for Mum and Dad too! You might even want to take a video of the big moment to show them when they get older!

If you’re yet to make up your mind on which doll’s pram is right for you, check out the full range here.