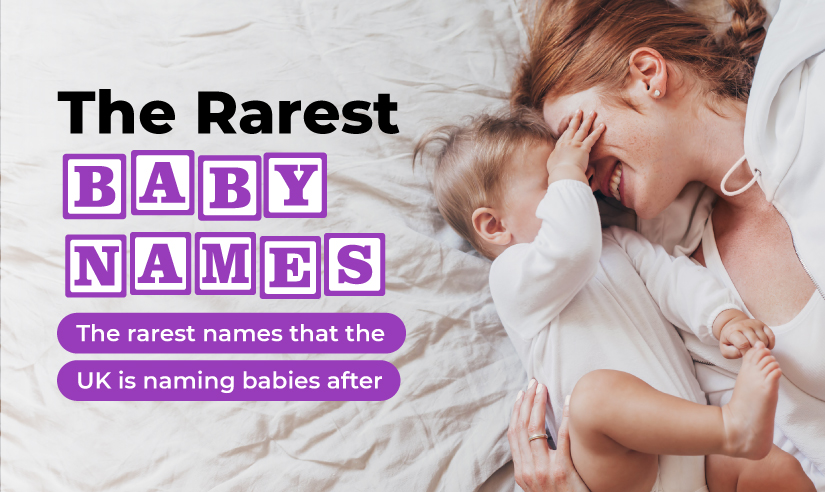 If there is one decision which splits soon-to-be parents, it’s the name of their baby.

It can be easy when you want to name your baby after a loved one within your family, however, choosing a new name can more often than not be a really difficult decision when you are expecting. Choosing a unique name can also bring difficulties when deciding what to name your little one.

Not only are we experts in dolls prams, but we also want to inspire expectant parents. That’s why here at Play Like Mum, we created a freshly updated list of our rarest baby names of the decade.

We dug deep into the latest available ONS data, looking at a list of over 3,000 of the rarest names, and narrowed it down to 50 for boys and 50 for girls. Included in our list are some of the best and more unusual names, including some names inspired by popular culture.

Our original list of 3,000 names consisted of the names which were registered just three times in England and Wales over the course of the year 2020. For privacy reasons, names registered two times or fewer were withheld by the Office of National Statistics.

The top 50 rarest baby boy and baby girl names of the decade:

What are the meanings behind these unusual names?

There is a story behind every name, and choosing a name which has an interesting meaning behind it can often be the deciding factor. That’s why we have looked at the inspiration behind some of these unique names.

Within our list of unusual names were many hyphenated first names. What is particularly interesting about this name is that Daniel James is a Premier League football player. In 2020, James was playing for Manchester United before making his move to his current club, Leeds United.

Drake is a name of English origin which means “dragon” or “snake”. However, if you are wondering where you have heard this name before, then it is probably on a radio or a music streaming service, as Drake is the name of one of the most popular rappers of recent time.

The name Esteban is actually a Spanish variation of the name Stephen. In Spain, Esteban means “crown”, suggesting a sense of regalness.

The name Wiley has been used as a nickname for William. However, the name on its own is of Scottish origin meaning resolute protection, coming from the word “wylye”. Wylye is also a river in southwest England.

You may be more familiar with the name Vincent, however, Vincentas is a Latin name meaning “winner”.

Although this beautiful name might sound Italian, it has French and Latin origins and it means “priceless”. A very pretty name if you are after something unique.

It’s been 10 years since Fifi and the Flowertots stopped airing on British children’s television, which perhaps explains the decrease in popularity. Fifi is actually a name of Spanish and French origin which means ‘Jehovah increases’. It is also a common nickname for Ophelia, Phoebe, or Fiona.

Elke might sound unusual at first, however, it is a name that has German and Dutch origins, and means “noble”. It is pronounced as “El-ka” and is a great choice for a unique name with a strong meaning.

You are probably familiar with Marvel from its comics and movies, however in 2020 Marvel became the name choice for three babies. As a name,  Marvel has French origins meaning to wonder or admire. It is a gender-neutral name and was also the name of a male character in the Hunger Games series.

Concluding our top five choices is Saffi, which is a name with Greek origins meaning “wisdom”. It is also a name linked with Sophie, which could make Saffi a great choice for a unique alternative.

We looked at the latest available ONS (Office for National Statistics)  data from the year 2020, to retrieve names which were registered three times or less during the year 2020. We did this for boys and girls. We then narrowed the list down to 50 for boys and 50 for girls before picking our top five personal favourites.

To explain the meanings of our top five favourite names, we used a variety of sources:

Best Baby Cities – The most family-friendly cities to have a baby in the UK revealed
Revealed: The World’s Most Family-Friendly Airlines (2019)
Paid Maternity Leave Around The World